You can support the Dinosaur Toy Blog by making your dino-purchases through these links to Ebay and Amazon.

Last time I did a review of a Geoworld product, I said that the company likes to put feathers only on species that are known to have feathers in the fossils. Well, unfortunately I should’ve done more research (and a little more glancing at my collection) because that was not the case. Today’s model is a feathered dinosaur by Geoworld, and it’s actually one of a few models that have sculpted plumage despite being currently absent in the fossils. The model in question is Utahraptor, and for once in the line, the colours look very believable. The model is sculpted with a feathery texture and is given a realistic spot-like pattern that remind me of the patterns found on big cats such as leopards. Unfortunately, I don’t think this color scheme is well-suited for anything that’s not a grassland, and we all know that grass was not very abundant in the Mesozoic. 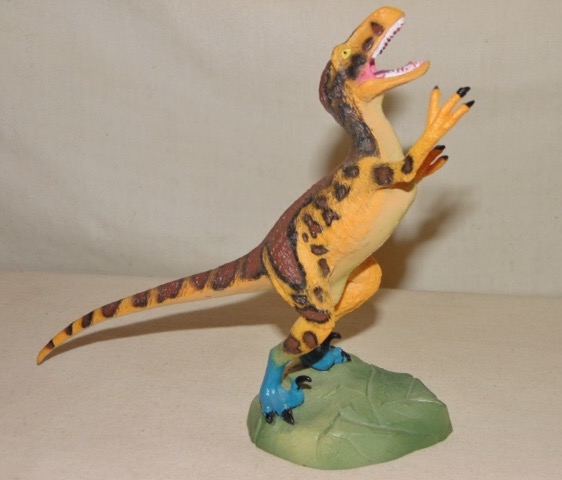 Despite this, the patterns and texture are pleasing to look at. The only downside is that the model is made in a ridiculous pose. The torso is arched upwards at an angle and one of its hands is raised higher than the other. The mouth is also wide open (since kids think theropods look cooler with their mouths open), but on this model, it looks ridiculous. What it is intended to be doing is beyond me, but the way I interpret it is that the raptor is about put his hand over his heart while he sings a ballad or two for his sweetheart.

In terms of accuracy, this model is pretty decent. The arms lack primary feathers, but in my opinion, this is best for Geoworld because whenever they do try such feathers, they always get them wrong (case in point: the Velociraptor) and the way the feathers are sculpted on this figure makes the model look more convincing as a living creature (if only the pose were different). Yes, I know that it’s inaccurate without primaries, but in this instance, I’m willing to let it slide. The head is your generic dromaeosaur skull that looks reasonable for a species like Utahraptor. The feet are the right shape and the hands have the correct number of digits. 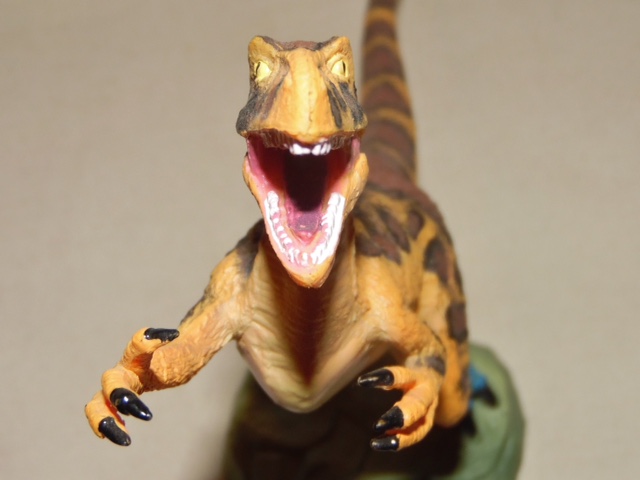 The colours on this model are the most strikingly realistic ones I have ever seen on any Geoworld figure. The main color is orange while the patterns are brown with black outlines. The feet are a bright blue which contrasts to the duller, more subtle colours on the rest of the body. The teeth are white (as usual), the claws are black (also as usual), and the tongue is pink.

Overall, I would say this is one of Geoworld’s more decent efforts were it not for the pose. If you can get over it (or find a diorama that requires a singing dromaeosaur), then go ahead and buy one from your preferred Geoworld retailer (mine just so happens to be Dejankins, who’s got the entire Jurassic Hunters line in stock for a fair price). 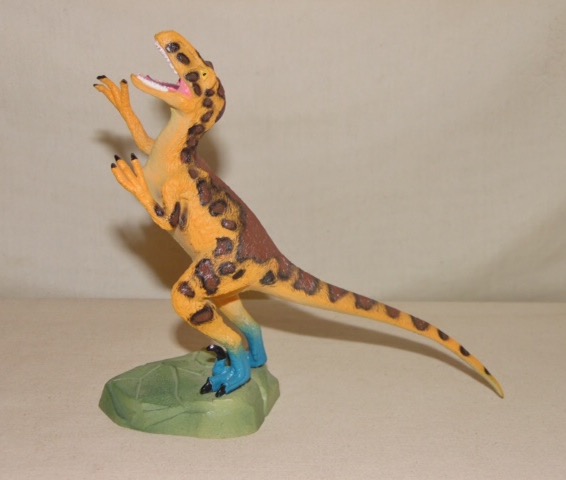 You can support the Dinosaur Toy Blog by making your dino-purchases through these links to Ebay and Amazon.